Skip to main navigation Skip to main content
All our branches are open, but some are operating with a reduced workforce due to the current COVID outbreak. COVIDSafe measures are in place.
Home Back to News & Advice Tips on Properly Comparing Flooded Lead-Acid Batteries
31 Mar 2017 Expert Advice

Compare the Right Data When Shopping for New Batteries

When it comes time to purchase new batteries for your golf car fleet, most fleet managers want to get the most for their money. It’s common practice to compare various batteries to see which will give them the best balance of longevity and reliability that fits their budget. With so many choices and information, it’s important to make sure you’re comparing “apples-to-apples.”

The problem with comparing batteries is that manufacturers don’t always use the same testing conditions, so the ratings and advertised data on one battery may not be the same on another.

To make a proper comparison, the first step is to make sure the batteries have the same internal construction (Flooded vs AGM vs Gel). You also need to make sure that the voltage output is the same and that the capacity ratings are similar.

This is where it can get confusing for many golf car owners and fleet managers. Battery manufacturers don’t always use the same testing criteria for ratings and cycle life data. For example, two similar batteries can show cycle life data that may not be an accurate comparison because they are often based on selective data from the manufacturer.

Typically, cycle life data is obtained by discharging the battery to a fixed depth of discharge (DOD) until failure. DOD is the percentage of amp-hour (AH) capacity discharged from the battery on each discharge. Most battery manufacturers recommend a 50 percent DOD for optimum cycle life vs runtime, but most cycle life charts are based on an 80 percent DOD.

The problem is that cycle life data can be quoted at a wide variety of DOD ratings which can result in what appears to show a longer cycle life for one battery type over another. This makes for a comparison that is not accurate. When comparing cycle life data, make sure the data is obtained using the same DOD.

Amp-hour ratings are often used to compare similar lead-acid batteries and can also be misleading. As an example, a 6-volt battery may list its amp-hour (Ah) rating as 200 Ah at the “20-hr rate”. This means that the battery will provide 10 amps of current for 20 hours until the battery is fully discharged or “spent”. A common mistake is assuming that a battery with a 200 amp-hour rating will provide 200 Ah at all discharge rates. Enter Peukert’s law.

This states that battery capacity decreases as the rate of discharge increases. If the same 200 Ah battery is fully discharged at a higher rate over five hours, the battery may deliver only about 150 Ah at 30 amps. The relationship between battery capacity and the rate of discharge is not linear, so it is important to find the rated capacity at the discharge rate for the application in which you plan to use the battery. Most battery manufacturers publish tables of ratings vs discharge rate, or discharge time, for each battery type.

Even though manufacturers list various amp-hour ratings, it’s often difficult to know which ones to use in order to make the right comparison for your application. It may be more accurate to use the runtime ratings in minutes that can typically be found on the battery manufacturer’s spec sheets and websites. As an example, U.S. Battery publishes ratings that show how many minutes a battery can provide at 25, 56, and 75 amp discharges.

By comparing the rated runtimes in minutes, you’ll get a better idea of the performance you can expect when comparing two similar batteries. These runtime ratings are based on the actual discharge currents seen in typical applications and may be more applicable than the amp-hour ratings. For example, RV and marine discharge rates usually fall into the 25 amp range while most golf car discharge rates fall into the 56–75 amp range (56 amps for 48 volt cars and 75 amps for 36 volt cars). 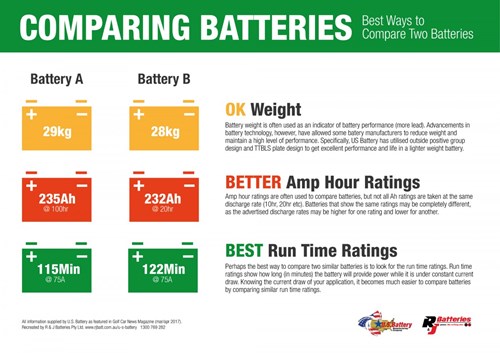 Battery weight is often used as an indicator of battery performance (more lead). Advancements in battery technology, however, have allowed some battery manufacturers to reduce weight and maintain a high level of performance. Specifically, US Battery has utilised outside positive group design and TTBLS plate design to get excellent performance and life in a lighter weight battery.

Amp hour ratings are often used to compare batteries, but not all Ah ratings are taken at the same discharge rate (10hr, 20hr etc). Batteries that show the same ratings may be completely different, as the advertised discharge rates may be higher for one rating and lower for another. 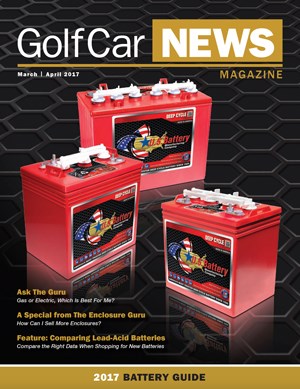 Cycle life comparisons should be made at the same depth of discharge (DOD).

Amp-hour ratings should be compared using the same discharge time and/or discharge current that will be used in the application.

Run time ratings may be the most accurate comparisons when selecting a battery for a given application.